Tyree Ag specializes in custom aerial and ground application services for crop and livestock producers in southcentral Kansas and northwest Oklahoma.  They are an authorized Corteva Pioneer seed dealer, a Retail Partner for AgroLiquid Fertilizer, and a supplier for a broad selection of crop protection and biostimulant products. Tyree Ag also partners with precision agricultural technologies for their customers in the attempt to help improve yields through more efficient use of their inputs.

Tim and Paige Tyree established Tyree Ag in the fall of 2000 and began operating out of the Kinsley, KS airport in the spring of 2001 offering aerial application services.  The following year ground application services were added along with the beginning of their long-standing relationship with AgroLiquid Fertilizers.  Additional aerial locations were acquired in 2004 at Ashland and Larned, KS and at Lyons, KS in 2020.

Beginning in 2006, major facility upgrades were initiated at the Kinsley location.  Along with an office, a new warehouse with adjoining fertilizer containment was constructed.  A state-of-the-art hangar was soon built adjacent to the Kinsley airport and completed in 2008.  These modern facilities provide secure and environmentally friendly storage for seed, liquid fertilizer, and bulk and packaged crop protection products.  All aerial and ground equipment are loaded inside in contained areas that are protected from the weather of the central plains.  Airplanes and ground applicators are loaded with automated equipment to ensure the highest level of accuracy and to minimize exposure to employees and the environment.  Additional improvements are planned for other locations in the future.

Ground application, along with fertilizer and chemical deliveries began in Laverne, Oklahoma in the spring of 2007. Construction was initiated in 2014 for new office and warehouse facilities that include outside fertilizer containment for bulk liquid fertilizer, along with containment inside for smaller quantities of specialty products such as micronutrients and foliar fertilizers. This new warehouse facility that was completed in 2016 also provides secure storage for crop protection products and contained loading capabilities for ground application equipment. The new office attached to the warehouse provides improved workspace along with meeting facilities.

In 2012 a small team of Tyree Ag employees began working on a purpose statement for the company.  After several meetings and many hours, it was agreed that the purpose of Tyree Ag was “to make your job easier.”  In 2021, they met again further developed this value proposition for the company. The employees at Tyree Ag have and will continue to work together as a unified team to provide quality products and services to its customers while maintaining a high level of accountability and reliability.  By doing so Tyree Ag will provide the most value to the operations of its customers. 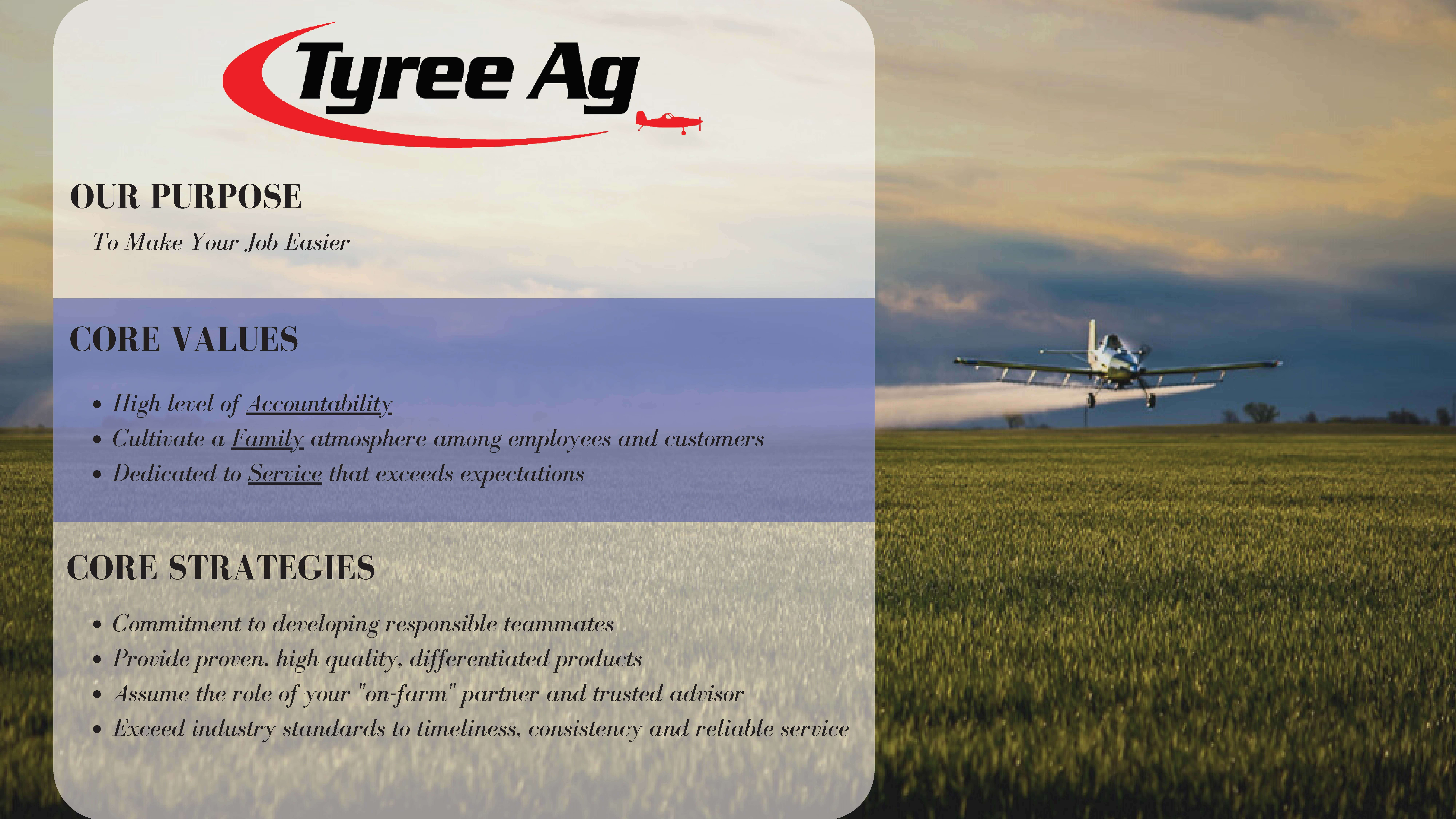