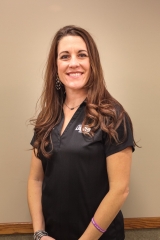 Tonya has been a Tyree Ag employee since February 2007. She grew up in Kinsley and later attended Kansas State University where she obtained her Bachelor's in Animal Sciences with a Business emphasis and a minor in Ag Economics. Later she worked at Golden Belt Feeders and at Kansas Wealth Management. Tonya married her husband, Brian, in 2000 and they now live outside Kinsley with their three children Levi, Luke, and Laci. As an employee, Tonya enjoys staying connected with the farmers and working with other Tyree Ag employees.