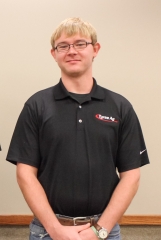 Thomas Cunningham began working at Tyree Ag in April 2016. Formally from Bloomfield New Mexico, Thomas moved to Kinsley in 2000 and later graduated from Kinsley High School. He attended Dodge City Community College where he studied Criminal Justice and Automotive Technology. Thomas has previously worked for Habiger Farms, Bumper to Bumper, and Midway Manufacturing where he was employed for three years. He and his wife, Domonique, reside in Kinsley and he enjoys racing and being outdoors. Thomas hopes to further his education while working at Tyree Ag in the aerial field.