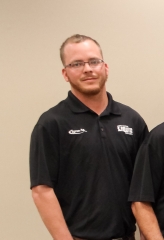 Jed Brenner began working at Tyree Ag as a salesman in November 2017. Jed was born and raised on a farm and ranch southwest of Pratt, Kansas. He graduated from Skyline High School and then attended Pratt Community College, earning his degree as an Electrical Lineman and  Applied Science in Agricultural Business. After college, Jed worked for Farmers Cooperative Coop for four years and for Alliance Ag Grain for two years. Jed and his wife, Chelsea, were married in August 2014 and they have 5 children - Payton, Lakin, Aiden, Briley, and Brekklyn. Jed enjoys working for Tyree Ag because it is a family-owned operation with values focused on the customer and the future.